One delightful autumn morning, the Bailey teens were all sat around the breakfast table munching away on some delicious pancakes Murphy had prepared.

‘I can’t help but notice that Mum or Dad haven’t picked one of us to take over the Bailey legacy,’ Amaretto said, tapping her fingers against the palm of her hand, ‘and it isn’t long until Murphy turns eighteen.’

‘They’ll make a decision soon enough,’ Jameson reassured, concentrating to balance his plate on his hand despite his body was shaking from alcohol withdrawal, ‘that or they’ll decide to get someone else to decide.’

‘Obviously it’s a choice between Malibu and I,’ Amaretto responded, turning to her sister.  ‘Women just make better inheritors.’

‘I beg to differ,’ Murphy cut into the conversation.  ‘I hear that our Great-Grandfather Fudge was the most awesome man in existence   Most Bailey men are in fact.  Even Uncle Cookie has his own art gallery set up.’ 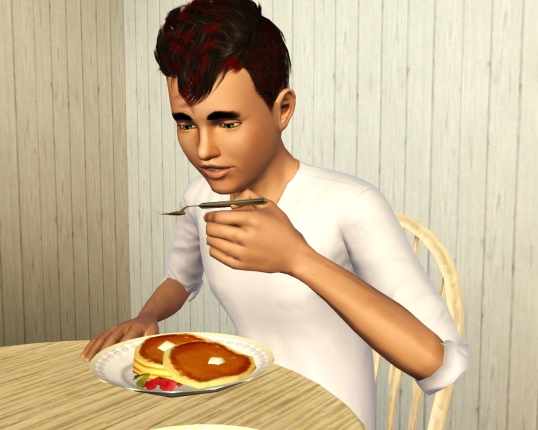 ‘Whatever, I have a cat,’ Malibu said, after getting up from her chair with Mew tucked under her arm, as the other teenagers followed suit, ‘so if I don’t become heiress, I’ll just become an evil genius instead and live in that volcano lair on the island.’ 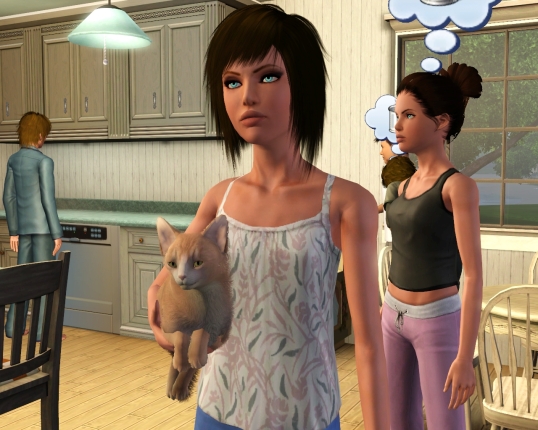 Now, since Jameson knew his Mum was the ultimate decision maker and that she did not really like him, he decided to try to warm her heart by taking an interest in his health and fitness.  Turned out that Jameson was a natural athlete, so exercise came easy to him.

‘Don’t think that working out with me is going to get you any brownie points, kid.  You’ll never make a worthy heir, and even if you were, I wouldn’t pick you,’ Coco announced, voice all high and mighty, despite she did not even have the “snob” trait.

‘Bitch, please, it doesn’t matter who you pick to be heir.  In ten years time you’ll be old and forgotten about.  You’ll have saggy tits, so no one will want you, not even Dad.’ 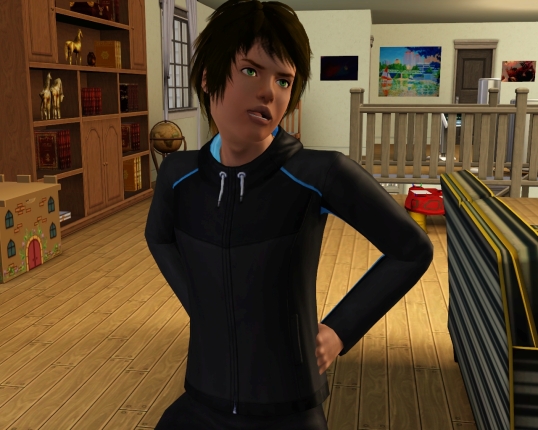 Coco pretended that Jameson’s comments did not get to her, however, the following weekend she decided to throw a costume party.  This was partly because it was Halloween, but mostly because she was now slightly paranoid about being portrayed as a boring old bag of wrinkles. 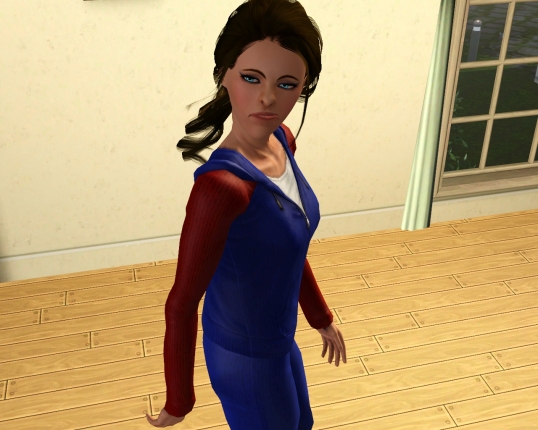 Murphy decided to recycle the costume he used one Halloween as a child, only now it made him look somewhat smexy and not a Johnny Depp rip-off / potential lawsuit.

Malibu decided to do something different and dressed up as a scuba-diver, somehow managing to pull it off pretty well. 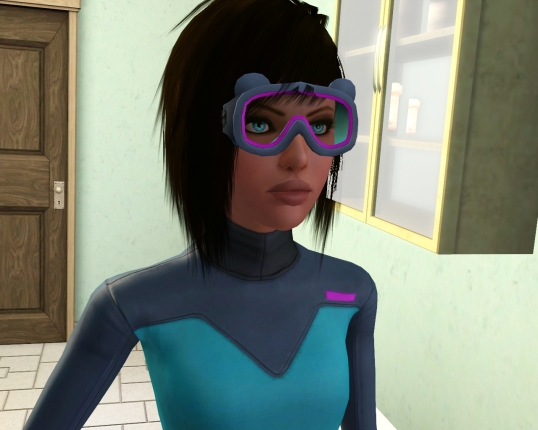 Amaretto opted for a cowgirl outfit since it was usually a safe bet.

And Jameson dressed up as a hot-dog, as you do.

The guests soon arrived, and instantly Jameson was drawn to a rather tanned looking individual called Nina.

Jameson quickly decided that this girl would become his girlfriend.

And so Jameson proceeded to woo her with funny cat videos.  Yes, really. 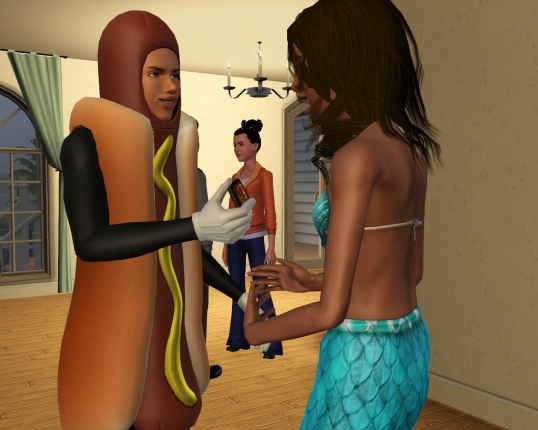 Malibu and Amaretto were not particularly impressed by the male talent (such as the man below), so they kept their knickers firmly on that night. 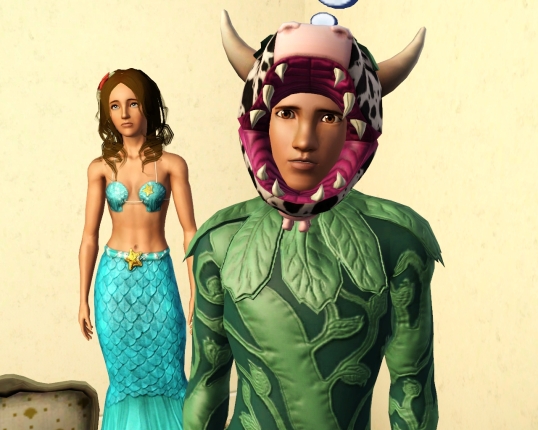 Murphy, who ditched his costume because Mew the cat threw up all over him after eating a piece of chocolate, was pleasantly surprised when he went to answer the door to one particular trick-or-treater. 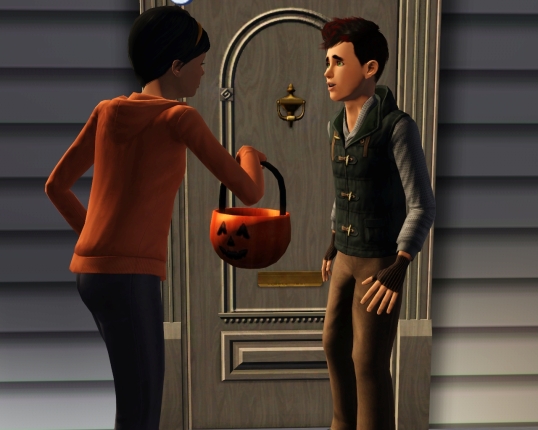 She was a couple of years younger than him and had wide innocent Bambi eyes which literally just gave Murphy the instant horn.

‘Well now, a pretty girl like you deserves a treat,’ Murphy smoothly said, dropping a few packets of Haribo into her basket (oi oi).

He then promptly invited her to attend his 18th birthday party, which was to be held in a few months time at the venue the Bailey family were renowned for booking their parties.

Sadly, Murphy’s crush turned out to be a bit of an evil bitch and completely ignored him on the day of his party and ended up getting off with a random fat bloke. 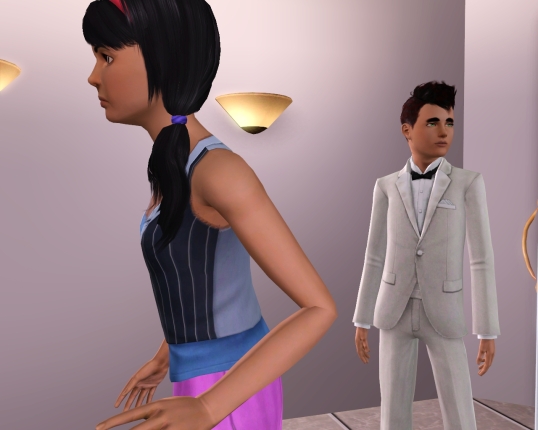 Murphy ended up spending most the night with an annoying guy who had not even been invited to the party.

The main thing was that Jameson enjoyed himself, so naturally nothing else mattered.

Well, that’s the end of Generation 4!  For the first time in this legacy, the choice of the next generation heir/heiress is completely yours.  There will be a few bonus chapters of all the candidates going to University during the next week or two, and the poll to vote for who you want to front Generation 5 will be posted up somewhere during this time, so stay tuned.

We end this generation on a picture of Mew the cat, because she is rather awesome and there was not enough screenshots of her in this chapter.